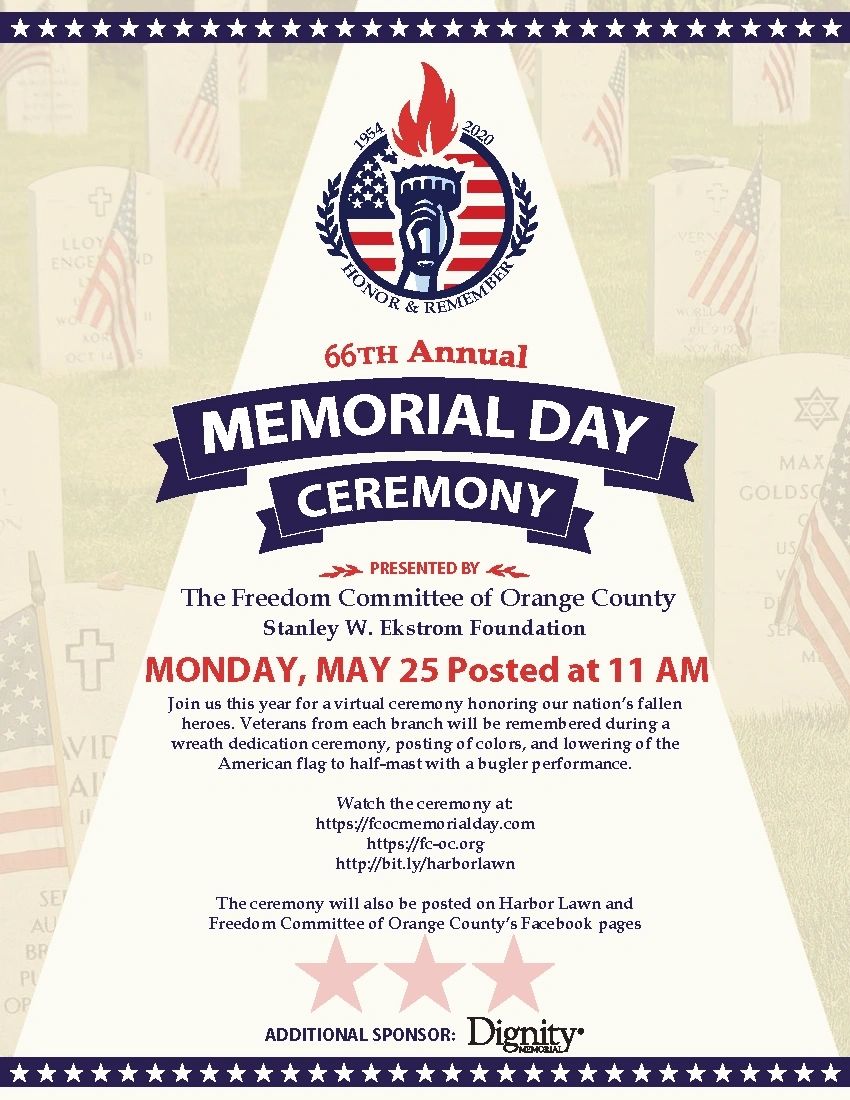 Our National Tradition Carries On

The plans for the traditional 66th Annual Memorial Day Ceremony on Monday, May 25, 2020 at Harbor Lawn-Mt. Olive Memorial park came crashing down with the Governor’s “Stay at Home” order in mid-March.

The Freedom Committee of Orange County (FCOC) veterans have participated in the ceremony since 1995 and co-sponsored the program since 2017. The gathering of no more than 10, the military fly-over, military band, inspiring speeches and the 1,000 or more lunches afterward were all cancelled due to the Wuhan virus that had escaped to these United States of America.

Our veterans were not naïve about the virus. They knew they were in the age group “bullseye,” 65+ years. Our veterans became restless. A plan was formulated to create a video streaming event. Following social distancing, masks, and some gloves, two dozen FCOC veterans, a Gold Star Mother, and wives of veterans met recently at Harbor Lawn in Costa Mesa.

Fred Whitaker, WWII, USA, Infantry is the keynote speaker this year. Fred is a 10th generation American whose ancestors fought at the Concord Bridge on 4-19-1775, the first victory of the American Revolution.

The wreath laying recognizes the six-Armed Forces services, WW I, WWII, Pearl Harbor Survivors, “Never Again,” Korean War, Vietnam War, Iraq and Afghanistan Wars, and POW who gave their last breath in the service of their country. From 1775 to 2020, more than one million Americans have given their lives to ensure the freedoms that we enjoy. Freedom is not free.

The Gold Star Family wreath was presented by Maria Simpson, a Gold Star Mother, to honor two members of her family who died in combat and on the behalf of the families who have lost loved ones while serving our country. FCOC veterans completed the wreath laying and rendered a hand salute to the fallen, while Fred McDowell, Bugler, rendered taps.

In conclusion, the American flag was returned to full staff and the ceremony adjourned.

This completed video will be posted to the Dignity Memorial Facebook page, Freedom Committee of Orange County’s Facebook page, and also can be viewed on www.FCOCmemorialday.com, www.fc-oc.org and http://bit.ly/harborlawn.

Thank you to our sponsors Dignity Memorial, Stanley W. Ekstrom Foundation, and The Freedom Committee of Orange County.

"Hymn to the Fallen"

This moving tribute to our fallen heroes in 26 American overseas cemeteries was shown at the Pacific Symphony's Hail to Heroes at the Pacific Amphitheater at the Orange County Fairgrounds in September of 2019.

The Freedom Committee of Orange County

Thank you to our generous sponsors